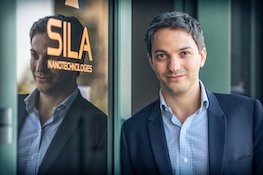 With the aim of developing clean-energy batteries for electric vehicles and sustainable transportation, Georgia Tech professor Dr. Gleb Yushin launched Sila Nanotechnologies in 2011 after 15 years of materials science and engineering research. Co-founded with former Tesla Motors principal engineer Gene Berdichevsky, the startup garnered a new round of venture funding in late 2020, increasing its valuation to $3.3 billion and setting the organization on pace for further growth. In 2021, the company also announced a deal with Whoop Inc., which plans to use Sila’s battery anodes to power a mass-market health and fitness-tracking wearable device.

Fueled by innovation that includes 14 patents licensed from Georgia Tech, Sila is poised to expand products, add jobs and a U.S.-based facility, increase its market clout, and influence battery performance standards in the coming years.

The technology: Next-level renewable energy
Although rechargeable lithium-ion (Li-ion) batteries have been commercially available since the early 1990s, industry has been slow to make significant advancements in their chemistry and capabilities, despite their game-changing potential in the quest toward a true clean-energy economy. Sila is looking to improve that pace and the performance of these batteries by iterating on multiple patented battery technologies. With over 55,000 technology iterations completed by early 2021—based on both technology licensed from Georgia Tech as well as other Sila patents—the company is developing next-generation Li-ion batteries with energy storage capabilities that extend far beyond what is currently available for consumer electronics and electric vehicles today.

Specifically, Sila’s newest anode material replaces a conventional battery’s graphite-based anode with one based on silicon. This allows the battery to store more lithium ions, thus increasing its energy density and resulting in a product that can be manufactured at a lower cost while providing better performance. In addition to a longer driving range in electric vehicles (EVs) or more features and longer running time in portable electronic devices, the move to stable silicon anodes greatly accelerates the charging speed. Sila hopes to start rolling out the new battery in consumer electronics this year and in electric vehicles by 2025.

The startup: Ten years old and growing
Based in California’s Silicon Valley, Sila’s technology advancements and market promise resulted in its securing new venture funding of about $600 million in 2020 (announced in 2021). The investment will enable the company to further advance its EV batteries and also introduce high-storage rechargeable batteries into markets for consumer electronic devices like fitness trackers and wireless earbuds.

2021 brought the company its first deal in the wearable device market with the September announcement that its battery anodes would be used in a wearable health and fitness tracker from Whoop Inc. Inclusion of the anode enabled engineers to shrink the size of the tracker by one-third without sacrificing performance. The deal marks the first mass-produced commercial product to include Sila Technology—a major milestone for the startup.

The impact of technology transfer
Through his passion for materials science and advanced battery research, Dr. Yushin has provided an ideal example of Georgia Tech’s lab-to-market pipeline success—one in which engineers and scientists work proactively and with dedication for a long time to take impactful innovations from the lab and develop them into inspiring and practical applications. The innovations Dr. Yushin helped to develop and licensed from Georgia Tech underscore the impact of materials science engineering on the future of transportation and the potential of clean energy to drive the U.S. economy forward.

“Most large companies have trouble identifying and commercializing revolutionary technologies that now commonly originate at universities or national labs rather than industrial laboratories,” said Dr. Yushin. “At Sila, we are focused on industrializing science at scale. To have a strong, innovation-driven economy, commercializing university research is a must. And I appreciate the work of Georgia Tech’s Office of Technology Licensing in making that happen.”

Automakers worldwide have announced plans to introduce more electric vehicles to market, and some countries have even announced plans to phase out all non-electric vehicles in the coming decades. Advanced battery material technologies licensed from Georgia Tech and significantly improved upon by Sila are preparing the company to respond to the world’s increasing reliance on renewable energy and to help a broad range of U.S. and international car companies to accelerate the transition to clean transportation, the path initially paved by Tesla Motors. Sila already has partnerships in place with BMW and Mercedes-Benz.

The future
Looking forward, Sila’s plans to revolutionize next-generation batteries should help maximize the potential of electric vehicles as well as help the company break into markets for powering hybrid-electric ships, electric trucks, electric planes, flying cars and autonomous vehicles. The company also expects to continue pushing the performance benchmarks for battery energy storage. Dr. Yushin and Berdichevsky have stated that technology and manufacturing advancements could pave the way for fast-charging battery cells capable of more than one million miles, 10,000 cycles, and a 30-year product life. Such high-performance, high-storage, long-lasting batteries could be produced with environmentally-friendly, broadly available or recycled metals to meet the growing calls for sustainability.

“The success of Sila —not just in its latest valuation, but also the impact it’s having on the U.S. economy and clean energy initiatives—is very exciting for Tech,” said Raghupathy Sivakumar, vice president of commercialization and chief commercialization officer for Georgia Tech, and co-founder of CREATE-X. “Bringing together commercialization and technology transfer activities with a goal of moving more intellectual property out into the marketplace greatly expands our impact around the world.”